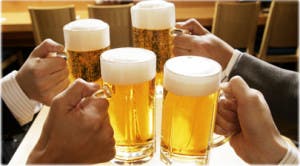 A BRITISH study has found that drinking two cervezas can be more effective as a painkiller than Paracetamol.

Over the course of 18 studies, researchers from the University of Greenwich found that consuming two pints of beer can cut discomfort by a quarter.

By elevating your blood alcohol content to approximately 0.08 per cent, your body receives ‘a small elevation of pain threshold’ and thus a ‘moderate to large reduction in pain intensity ratings’.

The researchers said: “Findings suggest that alcohol is an effective analgesic that delivers clinically-relevant reductions in ratings of pain intensity, which could explain alcohol misuse in those with persistent pain, despite its potential consequences for long-term health.”

Dr Trevor Thompson, who led the study at London’s Greenwich University, added: “Alcohol can be compared to opioid drugs such as codeine and the effect is more powerful than paracetamol.

“If we can make a drug without the harmful side-effects, then we could have something that is potentially better than what is out there at the moment.”