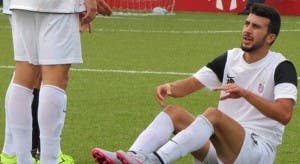 A PROFESSIONAL footballer has been arrested after allegedly smuggling an illegal immigrant into Spain.

Ismael ‘Maruja’ Abdelah (pictured right), from third-division club AD Ceuta, has been temporarily suspended after allegedly dressing an immigrant in a team tracksuit and bringing him aboard a ferry that was crossing the Mediterranean to the mainland.

The club has said that as they were crossing the Med for a match on Sunday, a coach discovered ‘the player helping an illegal immigrant cross to the (Iberian) peninsula’.

It added that it called the police, and ‘believes in the presumption of innocence of the player.’