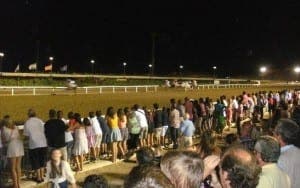 A SERIES of ex-mayors and councillors are to be probed over their links to the running of Mijas racecourse.

A court is to investigate ‘fraud, corruption and embezzlement’ over the running of the Hipodromo de la Costa del Sol.

So far 17 individuals, including three ex-mayors are set to be grilled over the handling of the race track, which was closely linked to two shady Eastern European gangsters.

It comes after Mijas councillor Francisco Martinez of the Podemos Costa del sol Si Puede party found sufficient evidence for the public prosecutor to take on the case.

Martinez claims official reports show that the track was illegally rented back to the town hall in a cosy arrangement that benefit councillors.

There were also clear irregularities in the awarding of the contract to run the racetrack, which the Olive Press exposed some years ago, as well as the re-classification of the land.

We revealed in 2008 how Mijas Town Hall had awarded a licence to two gangsters, Ukrainian Robert Gaspar, 55, and Armenian Robert Mani, 54, to run the track.

Under the guise of their own boss Roberto Fancini – described as the CEO of organised crime in Europe – they used it as the perfect foil for money laundering.

Their company Carrera Entertainments failed to pay prize money, file tax returns or pay their workers. They also failed to commit to promises to improve the venue by adding a covered stadium.

While Mani was arrested at Malaga airport a couple of years ago, Gaspar is still the subject of an international arrest warrant. Fancini is in prison in America over money laundering and fraud charges.

The trio were also involved in the so-called Majestic scandal at Casares Town Hall and linked to REM radio.