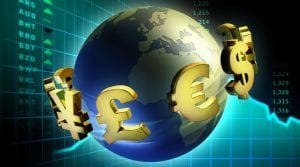 All traders must remember that within Forex market the currencies exchange rates are always quoted in pairs.

Forex currency pairs can be divided into few noteworthy groups due to their different features.

Groups are the following:

A term “the majors” is often used when it comes to Forex trading and every trader knows it. This term refers to the most frequently traded currencies in the world, which are: US Dollar (USD), Euro (EUR), Japanese Yen (JPY), Great British Pound (GBP), Swiss Franc (CHF) , Canadian Dollar (CAD) and  Australian Dollar (AUD).

Therefore, “the majors” are:

Majors are always a combination of USD – which is the world’s currency no 1 – with other most tradable currencies and they equal about 85% of the global turnover.

The EUR/USD is the most traded pair with a daily trade volume around 25% of the whole Forex market. Major pairs are considered to be stable and safe and they are seen as the best option for inexperienced traders with a free forex signal telegram group.

Cross-currency pairs are non USD Forex currency pairs, that are slightly less popular than majors. These are currencies from countries with highly developed economy, such as Japan, Canada, Great Britain, and also currency of The European Union. Most liquid and most traded “crosses” are:  EUR/JPY, EUR/CHF, EUR/GBP, CAD/CHF, GBP/JPY, GBP/CHF.

Exotic currency pairs are made up of a major currency (almost always USD or EUR) paired with the currency of an emerging economy, such as most of Asian of African countries; but also a strong but rather small economy from a global perspective, such as Denmark, Norway or Hong Kong. So an example of exotic pair would be USD/NOK or USD/DKK.

A solid and reliable Forex broker should offer at least few pairs from each group. CMC Markets offers over 330 Forex pairs as well as competitive spreads and award winning trading platform.