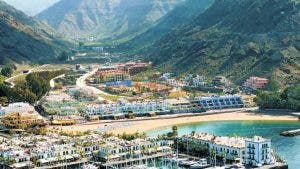 SPANISH cops have arrested a British woman for abandoning her two young children after she was spotted ‘walking naked and drunk in the street’.

Police say the two children, aged two and four, were found in a flat ‘hungry and dirty’.

The incident occurred in Mogan, a popular resort in Gran Canaria.

Local residents called the authorities after seeing the 30-year-old mother walking down the street ‘in an obvious state of drunkenness’ at around 10pm.

Guardia Civil officers arrived to the woman’s home to find the door open.

She was allegedly ‘naked and lying in bed with obvious symptoms of intoxication’.

A Guardia Civil spokesman said: “Officers arrested a 30-year-old foreign woman on June 23, who was on holiday in Gran Canaria and was staying at Nayra Street in Arguinegin which belongs to the municipality of Mogan.

“They went to the area in question after receiving several calls about a woman who was apparently inebriated and walking naked through the streets, while her children were throwing objects into the street.

“When officers arrived, locals told them the woman in question had returned to the place where she was staying moments earlier.

“They went to the place in question, discovering the door was open and hearing children crying.

“They entered immediately and found it in a mess with two youngsters, a boy aged four and a girl aged one year and eight months, who looked neglected.

“The little girl was in her crib and her nappy was full of excrement with nappy sores on her legs, a clear sign she had had the same nappy on for several hours.

“The four-year-old was crying and asking for food. Officers offered them food and water which the youngsters gratefully accepted.

“They also saw that the mother – whose initials are S.G.S – was laid on the bed without any clothes on and looked drunk.

“The officers acted immediately to take charge of the youngsters and alert professionals able to offer them immediate medical care.

“Their grandfather, who lives in the area, ended up taking charge of them.

“The mother was subsequently arrested on suspicion of a crime of abandonment and handed over to a local judge for questioning.”

It is not yet known if she has been released on bail.