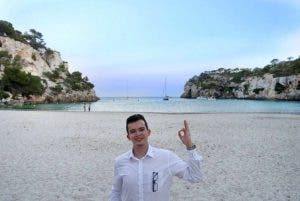 A BRITISH lad travelled to London via Spain because it was cheaper than getting the train.

Joe Furness, 21, figured out that it would be cheaper to fly from Newcastle to London via Spain than it would be to travel on conventional public transport.

In a video posted online, Joe explained that his trip was to ‘show just how ridiculous the UK train fares are’.

Furness wanted to travel to London from Newcastle, but the UK’s National Rail wanted to charge £78.50 (€89.30), even after using his 18-25 railcard, which awards around a third off the price.

Furness found that Newcastle to Menorca, and then on to London Gatwick came to only £26 (€29.50).

So the young Geordie flew to the Balearic and enjoyed a 12-hour-stop-over to soak up some sun and indulge in a cocktail or two.

Instagramming a picture from the beach, Joe wrote:

“I can have a night on a Spanish island, hire a car, have a cocktail on the beach, fly back to London and still have £40 left over….. OR I could have sat on a train, What would you have rather done?”

“It was pretty surreal, having just arrived from the North of England. There were hundreds of Spanish horse riders on the beach – I grabbed a Sex on the Beach cocktail from the bar and spend the rest of the time relaxing in the sun.”

After a spot of sun, Joe headed back to London to enjoy the delights of the UK capital with some friends and the £40 he saved by not travelling by train.