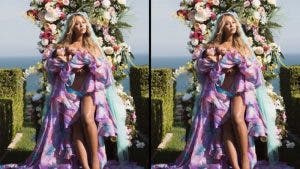 SUPERSTAR Beyonce has worn a dress by a local Andalucia designer in her first official photo with her newborn twins.

The American singer posed with an arch of flowers behind her as she held her two twin babies Rumi and Sir Carter.

The photo features the artist in pink floral dress sleeves and a long blue veil, designed by Cordoba-based Palomo Spain.

Palomo, reported on frequently in the Olive Press, is an incredibly new and progressive brand that’s reinventing what we consider to be menswear, led by designer Alejandro Gómez Palomo.

“She is wearing her unique Palomo organza gown that was made in our atelier in Posadas, the small village where Alejandro was born and still lives and works,” a Palomo Spain spokesperson told Mic.

In the lookbook for the collection this gown first popped up in, a man modeled it with thigh-high heels and a massive hat.

Beyoncé and her husband Jay-Z registered to trademark the names from the same California address as the trademark registration for the name Blue Ivy, their first child born in 2012.

Cristina Hodgson - 29 Nov, 2021 @ 08:45
A FIRE which broke out in an agricultural area of Nerja, seeing almost 75 firefighters and two Super Puma helicopters battle the blaze, has...