A SUSPECT in the Lisa Brown case has been found adrift in the Atlantic.

71-year-old Ron Beasley, from Wales, was found drifting 200 miles off the coast of Portugal.

The sailor, who has a wooden leg, was said to be so disoriented he was unable to recall his name when an Italian catamaran crew came across his shipwrecked yacht, the Doolou.

His ship was drifting without electricity or engine power in a busy shipping path and was at risk of being mowed down by a freighter.

Beasley told his rescuers that he was on the run from gangsters. When they asked him if he required assistance, he said: “No radio, no engine, no electricity.”

It comes just weeks after the Olive Press exclusively revealed Beasley was ‘hiding from criminal gangs’ in a port in Portugal.

Beasley, who was friends with Brown and her now-suspect boyfriend Simon Corner, told the Olive Press how he had absconded from bail after being arrested for withholding information in the case.

Brown was due to start a new job in Gibraltar when she went missing in November 2015, but Beasley said he knew nothing of her disappearance.

Speaking on a mobile from his boat in Portugal, he added: “The last time I saw Lisa was on November 1, (three days before she vanished), when I asked her if she had got some antiques I had delivered to her home, and that’s all I know.

“If I knew where Lisa was, I would have told the police.” 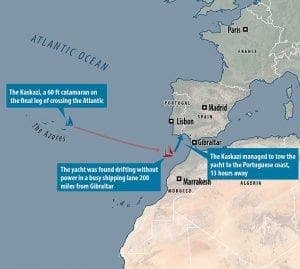 He is now involved in a legal tussle with Spanish police to have his passport returned.
The Swansea-born expat, who needs heart medication, claims he was forced to leave La Linea by local criminal groups.

He says they believe he could be a police informant after being docked close to people who work in the drugs trade and illegal dealings in Alcaidesa port.

“I’m just a guy on a boat trying to enjoy the easy life, I mind my own business.
“But they came to me and gave me 24 hours to leave or they said they would slit my throat.

“They think I’m a grass, if I go back to Spain I’m a dead man.”
He claims he has been pleading with the British Embassy for help, but that they had not returned Beasley’s calls at time of press.

Lisa’s sister said she could not comment directly about his involvement.
Helen Jordan, 50, said: “We just want him to tell the truth and maybe the authorities will then help him.”