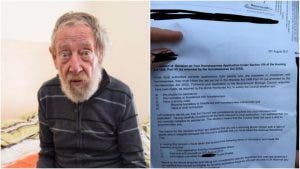 A BRITISH expat who returned to the UK has been found starving and sleeping rough after his local council refused to house him.

David Sutcliffe, 82, has been forced to live on the streets after he returned from Spain in August following a relationship breakdown.

But after living in Spain for two years, Bournemouth Borough Council has told the pensioner he is not entitled to council housing as despite being a British citizen he had failed the ‘Habitual Residence test’.

It means council bosses don’t believe David intends to settle in the UK.

It comes after he was found by police on the streets after a member of the public noticed he was so malnourished his trousers were falling down.

Officers found the elderly man clutching a letter from Bournemouth Borough Council telling him he was not entitled to help.

He has been taken to local charity Hope for Food who are now temporarily housing him in B&Bs through public donations.

Claire Matthews, founder of the charity, told Sun Online it has been left to volunteers to help David and try and trace his estranged son.

She said: “It’s a disgrace that in 21st century Britain an 82-year-old man can be living on the streets and no-one wants to take responsibility.

“He’s been passed from pillar to post and in the end it’s been left to a charity and the kindness of members of the public to put a roof over his head.

“The police who brought him to us were lovely but had run out of options. Someone had called them after noticing David was so skinny his trousers were falling down.

“He’s got nothing. Literally the clothes on his back and a carrier bag full of papers yet still the council seem to think he should just be left to head out into the world and get on with it.”

Members of the public have so far donated more than £800 to Hope for Food to house David for the next few days.

David is said to be in a frail and confused state and was found with just the clothes on his back and documents in a carrier bag.

The letter from Bournemouth Borough Council dated August 23 states: “Having carefully considered all the facts relevant to your application, I am satisfied that you are currently ineligible for assistance.

“This decision means the council does not have a duty to accommodate you.

Kelly Ansell, head of housing at Bournemouth Borough Council told the Sun Online: “We are unable to comment on an individual case due to confidentiality.

“We work on a daily basis with vulnerable individuals and in every case consider their circumstances in assessing the duty the council holds in respect of homelessness legislation.

“We always work with partner agencies, whether we have a duty or not, to ensure that appropriate support is provided.”

You can donate to Hope for Food here.