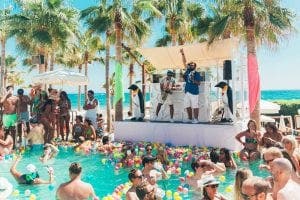 AMERICAN Punk Band Green Day (and I know that for those of you reading this who were around in 76 when the Sex Pistols, The Clash et al broke over the prog rock-infested British music scene like a tidal wave over a village fete “American Punk Band” is as much of an oxymoron as “Saudi Arabian Campaign for Real Ale”) have a song called Wake me up when September ends.

Maybe it’s my inner Cranckmeister being released, but I’m writing this column from the terrace of my cottage overlooking the Istan lake.

Normally is a perfect vision of tranquility, with black bass leaping to break the surface of the still waters, while mountain goats silently come down at dusk to drink. I half expect David Attenborough to be spotted in the shrubbery at some point, providing a low key running commentary.

But it’s August and I’ve just glanced across the lake to see at least five inflatables – including this season’s must have, a giant swan – on the water.

And the people in the water are enjoying their holiday in true Spanish style – with the volume turned up to eleventy stupid – while the children raise the kind of piercing screams that make me wonder if a great white shark has somehow made itself into the water and is rendering them limb from bloody limb. (a fervent wish, trust me).

Away from the lake, every trip to the coast is undertaken with the same stoic sense of resignation as soldiers heading to the Eastern Front.

Tales of huge queues to get into town centres, 40 minutes driving around aforementioned town centres to find parking space, the illegal use of elbows, shoulder charges and other dark arts not seen since the French front row in the 70s to get a space at the bar and lines at the checkouts that stretch as far as Extremadura.

Maybe it’s because – the terrible events in Barcelona notwithstanding – Spain continues to be seen as a mature and safe destination that this summer seems to be even busier than previously.

Or perhaps it’s the high profile that the British tourists have kept this year (running each other over outside beach clubs, staggering drunkenly around town with their tops off, casually lobbing hand grenades into hotel lobbies – you know, standard British ‘boisterous’ behaviour – and the subsequent outcry in the Spanish Press about ‘Marbeluf”.

Or maybe it’s just because as I get older and wiser (and that’s an oxymoron in itself) that I no longer look forward to the annual influx of party hungry tourists that I did as a younger and much, much wilder twentysomething, that I now find myself picking out Wake me up when September ends from my Spotify playlist, and longing for autumn, the season of ‘Mists and Mellow Fruitfulness’. And somewhere to park the car…