A COSTA del Sol summer break turned into a nightmare for two English girls within hours of their arrival.

Rae Breakwell and Paige Mitchell discovered their rental apartment in Marbella – organised through Airbnb – was filthy, stinking of alcohol and had two women asleep in their room.

And to make matters worse, when they got back after finding alternative accommodation they discovered their bags had been broken into and numerous items were stolen.

They had arrived at the apartment on August 21 to be told the owner was out of the country, but there was a spare key outside and the cousin would soon be along to help them.

“But when we got in, the place stank of alcohol and the curtains were drawn,” Rae revealed to Unilad website.  “We were sitting on the sofa and then the cousin rang and got angry when we told him we were in the apartment.

“We asked him what room we were in and he said: ‘the one by the bathroom’ so we went in.

“In the room were two girls passed out. I rang the owner and she had no idea whether another room had been booked.

“We think now that the cousin had been partying in the room with the girls the night before, and that’s why he was being shady”.

The girls went to the next room and began unpacking their things and to make sure everything was safe, they locked their belongings inside their suitcases before going out.

To their horror, on their return they found their stuff strewn around the room, and most of their valuables allegedly missing.

Rae said: “I rang my dad because he’s a police officer,” said Rae “and he told me to politely knock on and ask whether they’d seen my stuff – so that’s what I did.

“They told me they didn’t speak English. I could see my makeup bag in their room and I was getting really worked up but they got so aggressive and started shouting”.

Rae rang the police, but was told she would have to come to the station, which they later did. When the girls stopped shouting and returned to their room, Rae went into the living room and allegedly saw a massive knife on the table that ‘definitely wasn’t there before’.

A second altercation followed that ended with Rae outside the flat and Paige locked inside.

Rae said: “They threw my makeup bag back at Paige and threw other stuff at me. At this point Paige was really quiet which is unlike her so I was trying to talk to her.

“She eventually made it to the door and unlocked it. I do think if things had gone even a little bit further it would have ended up with that knife being used”.

Luckily the girls were able to book a hotel room nearby until Rae’s family arrived in Marbella for a family holiday a few days later.

Rae reckons the two lost well over £1000 thanks to the theft and the hotel room.

A police report has been filed and the listing is no longer on Airbnb. 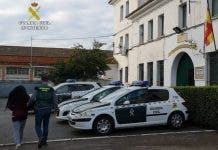