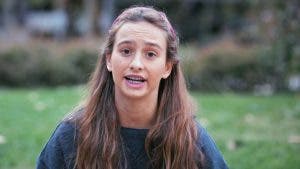 ‘LOVE Beats Hate’…has it arrived in your phone yet?

Here in Galicia it arrived in a friend’s phone from Andalucia.

It arrived in mine from the UK. It’s a short video making reference to the Catalan situation.

Cataluña and the independence issue are not for discussion here. What I do wish to comment on is the content of the video from various angles.

The article will present a number of questions to which I don’t have the answer but I think they’re important points and by way of research, I’m looking for a response.

So let’s drill down a little bit. What age is the girl presenter…14?…15? I don’t know for sure but she’s very young.

She starts off by referring to the Catalan situation and saying ‘What’s all the fuss about, what’s really happening.’

On my first viewing I was sceptical at this point, I mean she’s so young, was she really going to give us a political history lesson? But no, she goes on to speak on behalf of every teenager in the country and (with ‘beautiful life’ music fading in gently) begins to extol the virtues of life in Spain, highlighting education, healthcare, infrastructure, leisure time.

I wasn’t sure what I was watching, it seemed to be trying to encourage people to come and make a new life on the Iberian peninsula…

What was obvious in this part of the performance was that the dialogue was peppered with the word ‘love’. In my mind I was seeing a young adolescent’s school jotter covered with hearts and proclamations of love! And suddenly the bubblegum music came to a halt.

Now the second half of the video commences, no music, many images lacking real colour, grey or black and white. Regional nationalist politicians are described as crazy, she reels off a list of things and people that they hate and says that they remind her of the darkest days in Europe’s history (while simultaneous images play out what appear to be nazi troops marching menacingly down a darkened street and a current day march by independence supporters (I imagine – no information is given).

She says that these people are making us hate each other. She specifically says that they (nationalist politicians) are manipulating politicians and people, to attack the rest of us.

This second part of the video is liberally peppered with the word ‘hate’. Eight times I think.

Strong stuff for a young girl to be saying, in public, to a worldwide audience.

So how did this girl come to be on the video? Did she apply? Was she randomly chosen…or carefully chosen?

Who wrote the script?…she certainly appears to refer to a script below the camera, often.

Did someone choreograph it? Did you notice how she made a very deliberate glance over her shoulder, as if she might be in danger for her following words…”They won’t speak or allow people to speak in spanish…” (I checked this with a spanish, but non catalan, resident in Barcelona – they assured me that wasn’t true).

So there you are, I’ve given you what I got from the video, at least the parts that concerned me. But I am more concerned for the girl. She is very young and the video, to my mind, comes across as biased and propogandist…at the very least it is an activity of political persuasion.

To my mind, she’s too young for that stage and I would like to know if she actively sought the role and if so why.

If she was encouraged into the role I feel that was irresponsible and may even have repercussions for her.

Manipulation was mentioned in the video but I wonder if perhaps the girl has been manipulated…I sincerely hope not.

On the upside…it shows that if you want to make global contact…use english!….I ‘love’ spanish too by the way.

So, please, tell me what you think.