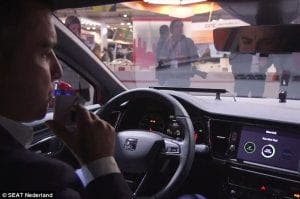 CARMAKER SEAT has showcased its new model in Spain which features a breathalyser which shuts the car down if the driver is over the alcohol limit.

It will then call a taxi for the driver, alerting the taxi to the exact location.

Called the Leon Cristobal, the family hatchback will only start if all occupants in the car have their seatbelts fastened and the driver has passed a breathalyser test conducted from the front seat.

And drivers cannot get sober passengers to take the test because the system has an eye monitor feature that knows which individual is in control of the car.

It is so high-tech that it can detect if a driver’s eyes are reading a text message and can even work out when you’re staring at a McDonalds drive-thru and suggests stopping for a bite to eat.

The Spanish carmaker provided live displays of the technology in action during the Smart City Expo in Barcelona on Tuesday and said it could potentially be rolled out across the wider Volkswagen Group.

This includes a feature called ‘Guardian Angel’ mode, which collectively activates 15 active and passive safety settings – such as adaptive cruise control and lane assist – to keep the car ready to react to any potential risk.

There’s also a smartphone app that can allow parents to set a maximum speed and area restriction that alerts them when their child is breaking their rules about where and how fast they can travel.

There has not been a release date announced.