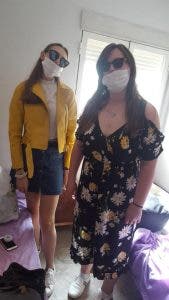 TWO British holidaymakers were left choking on ‘asbestos dust’ after the ceiling caved in on their AirBnB in Spain.

Jess Robinson and Lucy Evans, both 20 were covered in dust after a roof collapsed eight floors above their rented flat in Madrid.

Jess told the Mirror: “After hearing a huge noise, I opened the kitchen door and I could hear the cleaner shouting and screaming.”

“I rushed out of the kitchen only to be greeted with a cloud of grey dust coming towards me – within seconds it had covered the whole apartment.

“I started choking and grabbed a sheet to cover my mouth. The ceiling of the adjoining room to ours was completely on the floor, there was a huge hole in the roof and rubble everywhere.”

But when the pair  contacted their AirBnB host they were stunned when he replied with a ‘shrug’ emoji.

To add insult to injury, he then tried to force them to stay for a third and final night, with no cost deducted.

Lucy added: “It was unthinkable that we would stay another night given that our room’s ceiling was joined to the one which collapsed.

“The only compensation offered to us was £12 each for the night and a meal cooked by the cleaner, which was just insulting.

“Even though we wore masks for the entire time we were still feeling the effects of a tight breathing and itchy throat for days later.

“We were incredibly worried about asbestos, and planning to see a doctor just in case.”

A spokesperson for Airbnb said: “The safety and security of hosts and guests is our number one priority and as soon as we learned about this incident, we made contact with the guests to offer our full support.”