IT has been described as the world’s longest and toughest sporting event – a 45,000 nautical mile marine marathon across four oceans via six continents and 12 host cities.

Alicante was the starting gun for the 2017/2018 edition of the Volvo Ocean Race, and the sailors are currently closing in on Cape Town for the second leg of the race.

Seven teams of intrepid yachties are travelling across the world and back on the longest route since the event’s inception in 1973. 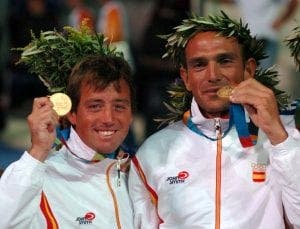 A challenge as prestigious as the Olympics or the America’s Cup, there is no financial reward but getting their hands on the winners’ trophy is an obsession that the world’s master mariners dedicate years of their lives trying to achieve.

Sir Chay Blyth and Clare Francis, the race’s first female skipper, are among the British legends who took part in the days when it was known as the Whitbread Round the World Race.

Now two-times Olympic medalist Xabi Fernandez is aiming to write Spain into the record books for the first time as the skipper of Mapfre, this year’s favourite to win.

With 7 in-port races under their belt the odds are looking good.

The Basque yachting ace who celebrated his 41st birthday three days before setting sail is as well-prepared as he can be for an endurance test that will see crew living off freeze-dried food and braving temperature variations of ?5 to +40 degrees, with only one change of clothes during their nine month ordeal at sea.

“One of the worst things in the world when you sail is the lack of sleep and being tired,” Xabi confided.

“There’s not much you can do. I think keeping the motivation up is the best solution.

“Obviously we like sailing in the ocean so it’s not that hard to keep nine people in the boat for so long.” 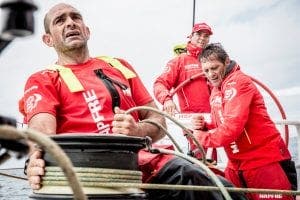 This year there is a renewed focus on the southern ocean, an infamously turbulent stretch of water afloat with hazardous icebergs.

To tackle the challenge, two crew members are on-board medics and the boat will change the position of the crew every six hours.

All teams have identical boats and Mapfre has two other Olympic gold medallists on board – Blair Tuke and Tamara Echegoyen – as well as the oldest sailor in the race, Joan Vila, 55, a  three-time America’s Cup winner.

The sailors are expected to burn 5,000-6,000 calories a day and an on-board water machine produces up to 50 litres of water.

However, they can only shower if it rains.

“The food is much better than people think,” said Xabi. “We have a menu that repeats every four or five days.

“Of course you miss vegetables and good meat.”

The Olive Press also spoke to Britain’s Dee Caffari who is skippering Turn the Tide on Plastic.

The British entry is a mixed, youth team with a strong sustainable message – to save the world’s oceans from plastic pollution. 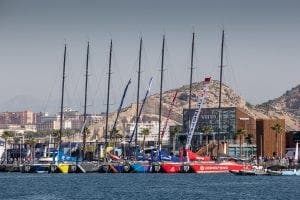 Dee said a lot of thought went into crew selection to minimise the psychological impact of the race.

“Having a balance of personalities that brings out the best in each other was important and I’m confident I’m going to have a lot of fun,” she said.

She added that the first thing she’ll do after the race is head home and see her dog – although not before savouring the moment.

“I will bask in the glory of seeing my crew having achieved something momentous,” she said.