A SPANISH court has agreed to extradite the man responsible for allegedly shooting three people, including one civilian and two police officers in Cantavieja on Tuesday.

Norbert Feher, a 36-year-old from Serbia, will be sent back to Italy to face more charges of homicide and home invasion robberies before potentially serving an additional sentence in Spain.

He is wanted in Italy as part of a European arrest warrant for the deaths of a barman and a guard in Italy’s northern region of Emilia Romagna.

As well as three home-invasion robberies with a gang in 2015 in which the victims were tied-up, blindfolded and beaten.

Nicknamed ‘Rambo’ for his survival skills in foraging berries and living off the land, he evaded capture from the Italian authorities until now. 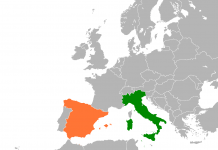