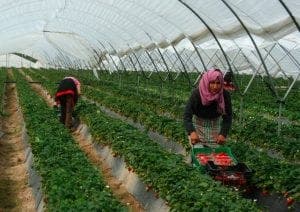 ANDALUCIA farms are having to recruit Moroccans and Romanians to fill tens of thousands of positions due to a lack of Spanish applications.

Only 840 people applied, despite the region having 850,000 people looking for work.

“We had the same problem last year when there wasn’t the workforce needed to collect all the fruit,” said Manuel Ceada, chief delegate of Huelva’s Economic Council.

“Some people might think it’s a contradiction that with the number of people out of work in the region, these job vacancies don’t get filled,” he added.

“The truth is that people who opt for agricultural jobs are the ones who haven’t been able to find any other kind of work.

“As soon as they get another job offer that meets their skillset, they quit.”

The region is having to bring in workers from Morocco and Romania to fill the positions.

It comes as Andalucia still has 851,742 people out of work and 96.89% of new contracts are for temporary work, making it odd that work would be turned down in such large volumes.

It’s likely that workers see farm work as below them, given that a survey this month by Adecco revealed that only 2 in 10 people would turn down a job offer.