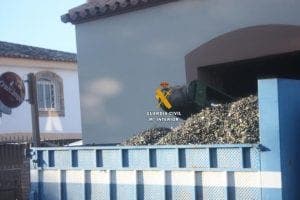 A GANG dedicated to stealing olives in Malaga has been dismantled by Spanish police.

Around 30 people are suspected of raiding olive farms and plots across the Guadalhorce valley, stealing thousands of kilos of olives before attempting to sell them.

The group became so prolific, the Guardia Civil set up Operation Olive-Hass in October to bring it down.

The thieves would strike at night, when they would be least likely to be detected, stealing from farms in Alhaurin de la Torre, Alhaurin el Grande, Cártama, Coín and Alora.

The stolen olives were taken to a warehouse in Alhaurin de la Torre, where they would be sold on once 3,500 to 4,000 kilos had been accumulated.

There was little to no documentation to say where the olives came from, posing a health risk to the public.

Some 10 people were arrested while another 19 remain under investigation following the police raid.