A LETHAL caterpillar capable of killing pets and injuring children will be back on the streets from next month.

In pets, particularly dogs, they can cause breathing difficulties, vomiting and foaming at the mouth.

Pets showing such symptoms should be taken to the vet immediately.

The caterpillars, which come out in force in the spring, are covered with tiny barbed hairs that contain a protein called thaumetopoein.

If they feel attacked, they will shoot their tiny hairs like harpoons.

Dogs are most at risk as they can also pick up the hairs in their paws which they then lick when they become irritated, causing the poison from the hairs to spread to the mouth.

Amputations of the tongue or nose can be necessary to prevent the poison reaching the throat and causing suffocation. 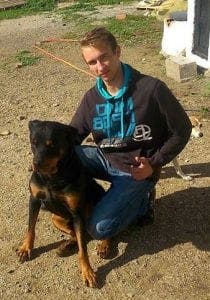 Pine forests or areas with pine trees are the most at risk locations.

If you become aware that you have these caterpillars on an urbanisation then you should inform the community of owners and they should be removed.

Councils may spray down municipal parks but this cannot always be relied upon.

Do not attempt to remove them yourself.

A dog-lover previously told the Olive Press how he watched his beloved pet die in agony after sniffing one of the caterpillars.

English expat Paul Dobson, 55, could do nothing to save his rottweiler, Louis (pictured), after he was fatally poisoned by processionary caterpillars in Velez-Malaga.

Despite three days in intensive care, Louis died from eating the poisonous larvae, which are very active in pine forests during winter months.

“I found my beloved rottie suffocating on his own tongue. He was slobbering profusely and vomiting everywhere,” Dobson said.

“If your dog shows these symptoms get them to a vet. Don’t wait and see what happens, do not waste time ringing, just go!”

Expat vet Jens Klausen told The Olive Press he has seen an increase in the number of poisonous caterpillars over the last few years.

He said: “The hairs are extremely poisonous. If a dog sniffs or eats them then they should immediately be washed with water.

“I have had to remove parts of a dog’s tongue or lips because of this. It really is horrible to see.”