DETAILS have emerged of the victim of a lethal hit-and-run in Marbella.

Paul Murphy, 60, died after being struck by a Range Rover outside his home in Puerto Banus on January 23.

Hours later the man’s 30-year-old son, his Spanish girlfriend, 20, and a pal were held in connection with the incident.

Sources said they were arrested on suspicion of homicide — although the idea they may have struck him by mistake has not been ruled out.

According to Policia Nacional, the SUV pulled up by the home around 1.45am on January 23.

The son, friend, and Spanish girlfriend all remained in the vehicle while the father got out.

It was then that the group allegedly ran over the older expat, killing him just metres from his home.

The corpse was left laying in the road and police were soon able to identify the vehicle behind the hit.

Cops took away the Range Rover for forensic tests.

The victim is said to have had a passport in one name and driving licence in another.

Yesterday the arrested trio were bailed but they cannot leave Spain while police investigate.

Murphy lived in a £2,000-a-month villa near Puerto Banus. 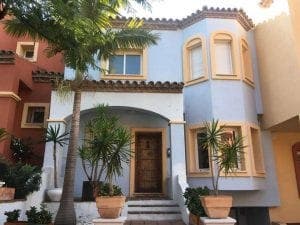 One neighbour said: “The woman he lived with was a lot younger than him. As far as I know he didn’t work. I assumed he was retired and had come to Spain to enjoy the sun.

“He drove a discreet car but he must had had quite a bit of money because houses round here rent for up to £2,000 a month long-term and upwards of £5,000 in high-season on short lets.

“I still can’t get the sight of the two large blood stains where he ended up on the tarmac out of my head.”

A spokesman for Spain’s National Police confirmed: “We are investigating the death of a British national who was run over near Puerto Banus and have arrested three people.”