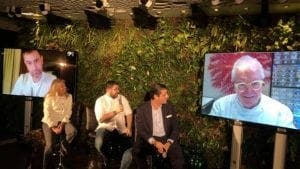 A WHO’S who of Spain’s top chefs will cooking up a storm to pay tribute to legend Juan Mari Arzak in Marbella next week.

A total of 20 Michelin starred chefs will be whisking in to the A Cuatro Manos event at the Puente Romano hotel from March 18 to 20.

Hosted by Marbella’s very own superchef Dani Garcia, the group of chefs – who hold 40 stars between them – comprise the very best of New Basque cuisine.

As well as Arzak’s very own daughter Elena – who has maintained the three stars at his same name restaurant – triple-starred Juan Roca and Martin Berasategui – who has a total of eight stars – will also be on hand.

They are set to be joined by Ramon Freixa, Paco Roncero and Andoni Luis Aduriz, who is ranked as the third best chef in the world.

And such an event wouldn’t be the same without Ferran Adria, whose El Bulli restaurant won the Best Restaurant in the World award for five years in a row.

Two years ago, at the same event, he told the Olive Press that it was ‘one of the best collections of chefs he had ever come across in the world’.

Now in its fifth year, the A Cuatro Manos event, is billed as ‘where the creativity and talent of the participants is the driving force of unique, exclusive and unrepeatable nights’.

Marbella mayor Angeles Munoz described the event as a ‘key international event’ which helps to put Marbella on the food map.

“Marbella can now boast of top haute cuisine and has an unparalleled offer of quality and excellence,” she said.