NEW ‘hidden’ speed cameras will be rolled out across Spain on March 28, the beginning of Semana Santa.

According to the Directorate General of Traffic (DGT), 30 of the 60 new cameras will be up and operating from March 28, with the rest being rolled out by early May.

The so-called Velolaser is a small and portable camera that can record speeding drivers ‘without being noticed’.

The locations of the new cameras have not been revealed.

Its light and compact character allows it to be placed in the guardrails and in police vehicles. 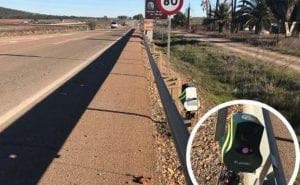 Its management is possible from any mobile device through a 3G or 4G connection, and the data can be sent to several devices at the same time.

The DGT hopes it will help reduce accidents caused by speeding.

In the Holy Week of 2017 there were 29 deaths on Spanish roads, the lowest number of deaths in accidents of the last four years.