AN entire island has been bought by a Luxembourg family for €18 million.

S’Espalmador, in the Balearics, was on sale for months but the regional government ‘could not afford it’, saying they had no support from Madrid.

The island is a protected nature reserve, and the family have been warned they are prohibited from any type of construction under the law.

It had been owned by Norman and Rosy Cinnamond who inherited from their British grandfather, Bernard Cinnamond, who originally purchased the mini paradise for just 42,500 pesetas from the Ibizan Carlos Tur (around €14,000 in today’s money). 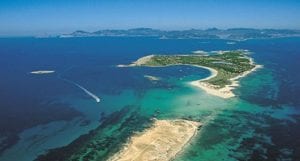 The three-kilometer long island sits in the Ses Salines Natural Park and contains 137 hectares of land.

All swimming excursions to the island have been stopped and the popular mud baths for tourists have been banned in a bid to protect the area.

Local authorities had tried to stop the sale, but the Balearic government’s appeal for help to stump up the cash went unanswered by the national government.

Councillor Pilar Costa said: “The owners told us they had an offer so we addressed the deputy prime minister of the central government to ask for support for the purchase. They verbally told us they would consider it but they never answered us and in the end the owners accepted the offer of the buyers.”

The new Luxembourg owners are ‘well aware of the regulations of the island,’ according to their representative.

There are already two small houses on the islet.

“I am convinced they have bought it knowing what there is. I don’t think anybody is that naive,” said Silvia Tur, a deputy for the Gent per Formentera party.