MORE Brits under 40 were killed in Spain than anywhere else in the world last year.

An investigation by The Sun revealed that 49 Brits died in the country in 2017.

The figures include 29-year-old Brit Loran Atkinson, who plunged to her death while partying in Fuengirola on the Costa del Sol in December.

Australia had the second-highest number of deaths, with 27 losing their lives.

France and Thailand came in joint third with 25 Brits under 40 dying in each country.

The figures have been obtained through a Freedom of Information request, obtained by the Sun.

Cambodia and Thailand were the most deadly when the amount of deaths were compared to the number of visitors.

There were 11 deaths in Cambodia last year, which when taken against the 136,232 Brits who visit the country on average each year, mean a death rate of roughly eight young people per 100,000 Brit visitors.

Meanwhile Thailand’s 25 deaths mean a death rate of around six young people per 100,000 when compared to the 411,000 Brits who usually go each year.

Spain has nearly 13 million British visitors per year, making it one of the safer countries with just four young people dead per million Brits coming to the country each year.

Similar rates are found in Portugal, Turkey and Germany with roughly four out of a million and even fewer per capita dying in France and Italy. 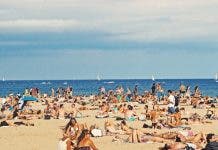