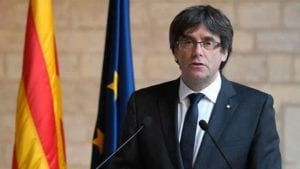 GERMAN authorities are doubting if they can extradite former leader of Catalunya, Carles Puigdemont, on the second charge of misuse of public funds.

It comes after the separatist leader was released on bail from a prison in Neumuenster last week, after a German court dismissed Spain’s charge of rebellion against Puigdemont, following his involvement in the Catalan referendum in October.

German judges have requested further information from the Spanish Supreme Court in order to come to a decision regarding the second charge of misuse of public funds.

Authorities said Puigdemont was ‘co-responsible at least politically’ for generating funds to hold the referendum which cost approximately a staggering €1.6 million.

They added that although the Catalan regional government was not authorised to use funds for this purpose, it is ‘unclear’ whether the State had to take responsibility for the costs as they were borne by a regional budget.

However, there is reportedly no proof these funds were in fact used from the budget and Puigdemont claims he met costs by ‘private means’.

German judges still have some days to make a decision.

While the case is investigated, Puigdemont has called on Spain to begin fresh negotiations regarding Catalunya’s independence.

Speaking at a press conference in Berlin the day after his release on Saturday, the former leader said he hopes the German court’s decision to not extradite him on Spain’s charge of rebellion, proves that ‘political measures are needed’ to diffuse the hostile relationship between the Spanish government and Catalunya.

“This opens a new opportunity of dialogue,” he said.

If the German court also dismisses the charge of misuse of public funds, this could further aid negotiations.

55-year-old Puigdemont said he will stay in Berlin until the case has been concluded where he must report to a police station once a week.

If the courts decide he should not be extradited, the separatist leader hopes to return to Belgium where he holds residency.

Catalunya still remains in a state of political limbo, after Rajoy dissolved the Catalan parliament and placed the region under direct rule from Madrid following the unauthorised referendum.