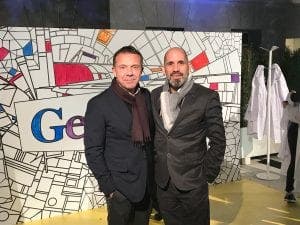 IN my so far rather colourful journalistic career, I’ve had the opportunity to interview the good – Rik Mayall was as brilliantly funny as you would expect – the bad – a certain TV talent judge wouldn’t come down from his hotel suite on a Sunday morning, after I’d travelled two hours by train to meet him.

Needless to say I didn’t come back later that afternoon as his frazzled press agent implored me, and the ugly – let’s just say my planned interview with bad boys Danny Dyer and Tamer Hussain went on into the early hours.

I didn’t come away with a story but we ended the evening as firm friends…I’m just thankful we didn’t get tattoos.
But after you have done the cava and cocktail circuit in Marbella for a couple of years and have rubbed shoulders with It-girls, wannabes, Premiership footballers and most of the cast of TOWIE, you can get a little jaded with it all.

I even get a little blasé about the invitations to the openings of new bars and restaurants, preferring to spend my evenings up on my lake away from the madding and maddening crowds.
But when an invitation to a world premiere screening featuring a genuine Hollywood A-Lister drops through my virtual letterbox, then it’s time to fling on the glad rags.

‘Genius:Picasso’ is a ten part series by National Geographic TV about Pablo Picasso, Malaga’s favourite historical son and starring Antonio Banderas, Malaga’s contemporary historical son. The company decided to premiere the series in Malaga in the week leading up to Semana Santa, when Antonio makes his annual pilgrimage to the city.

Purely by chance I had arranged to interview the extremely urbane Olivier Picasso, the great man’s grandson, and he invited me to the event at the Teatro Cervantes and the after party.
Banderas may love Malaga, but Malaga loves Banderas more.

When I turned up to the screening a good hour and a half early, the hardened fans and even more hardened paparazzi were already in place in front of the photo wall, waiting for the man himself.
Inside the theatre was no different, with hundreds of invited guests doing their part in the Antonio love in.

The only slightly off note was when the CEO of National Geographic TV decided to rung through an exhaustive list of his films. ‘We know who he bleeding well is, let him on stage’ you could hear the collective murmuring.

But when he finally took to the stage, Antonio had us all captivated. He spoke of his love of Malaga, his love of Picasso and the fact that when filming here he had been breathing the same air and feeling the same sun that the great artist was. He finished by telling us that Picasso’s daughter told him that once she caught Pablo waking from a siesta and smiling “I’ve been in Malaga’ he told her.

You could hear the audience melting after that remark. Banderas isn’t an A-lister for nothing….