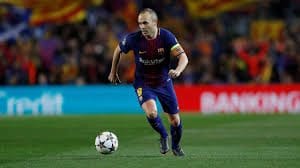 But to sweeten the deal, they also vowed to order six million bottles of wine from Iniesta’s cellar, worth six euros each – amounting to €36 million.

It means the total deal would be worth €116 million.

“There are still things to be sorted. I have said I will never play against Barca, so I won’t play in Europe. Barca has given me everything.”