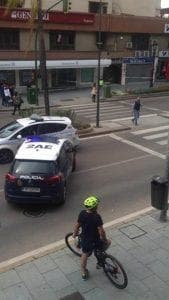 A MARBELLA street has been cordoned off following a bomb threat this morning.

Policia Nacional have evacuated Ricardo Soriano after an anonymous caller warned of an explosive device in the Bankia bank at around 11am.

All customers and employees have been evacuated.

The premises are being checked for explosives by a bomb squad.

UPDATE: The road has been reopened and the threat declared a hoax.