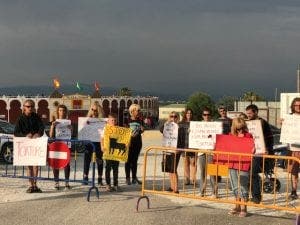 BRITISH expats have protested against a bullfight after discovering it was funded with their tax money.

Jeni Obard, 55, was one of five Brits who took part in the demonstration led by Malaga Animal Save outside the Plaza de Toros in Coin during an event for training matadors on Saturday.

“The people of Coin were not consulted about this and it’s partly funded with their taxes,” added Obard, who moved from the Isle of Wight two years ago.

The protest was organised alongside a 1,300-strong petition set up by a local Spaniard in a bid to demand Coin town hall return the money spent to part finance the event. 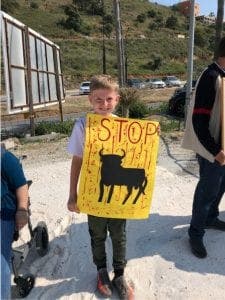 Alhaurin-based Obard said a request to hold a peaceful demonstration of up to 30 was ignored by the town hall despite campaigners’ daily calls.

The vegan expat described the treatment of the bulls as ‘extremely traumatic’ and recalled blood dripping out of the truck that took the dead animals away after the fight.

“Parents take their children to watch this and it desensitises them to think it’s okay to treat animals like this,” added the expat, who was a staunch fox hunting protester in the UK.

“I can see the beauty of the moves and I know they train for years but it’s so barbaric.

“People think it’s an art and culture but it’s torture.”

Five bulls were killed at the training event, which are criticised by campaigners for causing the animals a more painful death than usual because the matadors-to-be have not yet been trained to kill more humanely.

A spokeswoman from Coin town hall confirmed to the Olive Press that some tax money was used to sponsor the event, organised by Escuela Taurina Diputacion de Malaga and Toros de Mediterraneo, but she insisted this was not something they were hiding.

Some of the funds also came from the bullfighting school and other organisations.

Shore Warning: These virgin beaches in Spain could be under threat from development