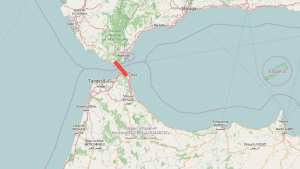 A PROJECT to build an underwater tunnel connecting Spain and Africa is back on, experts have claimed.

A Spanish government committee currently exploring its possibility has said it is still viable despite construction challenges.

The submarine tunnel would be the first land link between Africa and Europe, measuring 38km in length.

Rafael Garcia-Monge Fernandez, president of the Spanish Society of Studies for Fixed Communication through the Strait of Gibraltar SA (SECEGSA), told a press conference in Algeciras that the project is back on.

The tunnel would be 475 metres below sea level.

Previous studies questioned the feasibility of the project, but Herrenknecht, the largest tunnel construction company in the world, carried out a new assessment with the University of Zurich, which concluded that the tunnel is possible.

A tailor-made prototype of a tunnel borer will be the next step, costing €32 million.

Spain and Morocco both want the tunnel, but costing an estimated €8 billion, the EU will have to provide serious funding.

High speed trains in the tunnel would make cargo journeys between Madrid and Marrakech up to three times shorter.

The tunnel could also be used to carry solar energy from the Sahara to Europe.