FEW corners of Mallorca offer such a good range of quality places to eat.

As well as a couple of Michelin-star joints, there are plenty that deserve the accolade and should hopefully get them over the coming years.

Up in Pollensa village, one of the most exciting places to eat is with Italian duo Michelangelo, 33, and Nicola, 32, at R3SPIRA, created out of a beautifully renovated iron foundry.

It’s an attractive, well-lit space, with a great range of original artwork and it also has a lovely terrace at the front, if you can get a table.

Concentrating heavily on local produce from Pollensa, Picafort and Sa Pobla, the menu changes by the day and is reflected in the blackboard that was totally different on the three or four evenings I passed by. 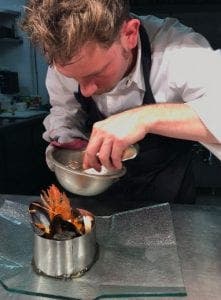 The quality was second to none and I particularly liked the original broccoli soup with a scallop and king prawn that was rich and tasty, as well as the stuffed ‘cappelletti’ pasta with truffles and Grana cheese.

There is a big pasta section as you’d expect, as well as plenty of salads, but I’d particularly recommend the creamy seafood risotto with prawns, mussels and parsley, which was cooked to a tee, as well as the surprisingly original main of Aberdeen Angus strips with shavings of parmesan and thinly sliced Sa Pobla potatoes.

The interesting wine list had an excellent local number, Mortitx, at €3.90 a glass.

Another good alternative for pasta lovers is La Merceria, recently opened in the main square, run by a hip crew of Italians and local Mallorquin Roberto, who has lived in Pollensa all his life.

This is a buzzy place, where the kitchen is very much on view, in particular to watch the chefs making fresh pasta in the morning if you make it here before lunch.

There is a charcoal oven for pizzas and lots more, but I would recommend the cod ‘bunuelos’ as a starter, served with a sprinkling of broccoli, and one of the best spaghetti carbonaras I have ever tasted, all thanks to the chefs, brothers Davide and Luigy, from Naples.

On the coast in Puerto Pollensa you are also spoilt for choice with a range of superb restaurants.

Easily the best sited has to be La Llonja, where owner Miguel has returned in the most poignant roundabout fashion, having first worked here as a boy at the age of 14 for a summer job.

“My dad helped me get the job and I loved the place, which was always bustling and popular,” he explains.

Then after a career in tourism and 10 years working abroad in Germany, at the Hyde Park Hotel in London and in Switzerland and the Canary Islands he finally came back.

“Then by complete coincidence I found the concession for the restaurant was available and I applied for it and won. I’ve never looked back.”

It is no surprise. Sitting above the port, in the heart of the marina, the views are a 360-degree panorama of green, blue and white, the latter being the stunning nearby yachts.

With a mix of international, and mostly returning clients, this is certainly somewhere special, with the Night Manager’s Tom Hiddleston having dined here recently. 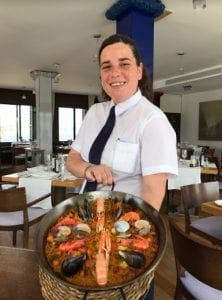 And luckily the food does not disappoint. A largely traditional Spanish menu, heavy on seafood, I was recommended the fideos by a client and was amazed at its quality.

This is perfect lunch fare, served with the freshest of sea food and a decent sized serving to boot. I also liked the amazing tuna tartare and a dish of fresh local tomatoes which came out as a small tapa to begin with.

The desserts were amazing, in particular the tarte tatin. I would also highly recommend the food at the yacht club itself next door.

The very epitome of privilege and tradition, the Reial Club Nautic Port de Pollenca, to give it the full name, is a wonderful spot right by the water.

Surrounded by sea and stunning yachts, you eat in a good spot under giant parasols, with simple settings and impeccable service.

There are plenty of paellas and rice dishes, as you’d expect, but I would rather recommend the excellent grilled turbot with a dried fruit vinaigrette I also particularly liked the shrimp and monkfish salad with pineapple and coconut vinaigrette as well as the amazing lobster salad with mango and avocado.

There is a curious Iberian loin with octopus, shrimp and beans that is highly rated, while the roast duck magret main with apple, sauerkraut and blueberries was a winner. 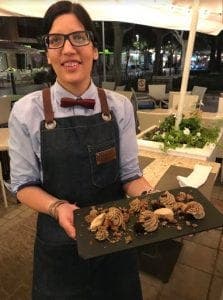 Also in Puerto Pollensa, in a square set back from the sea is the superb Osteria 15. Run by partners Stefano Pellucchi and Roberto Maggioni, both talented chefs from Italy, this is one of the must-visit restaurants in Pollensa.

It feels almost like a play watching the world go by on the busy terrace in late Spring or Summer.

The throng of hundreds of diners, met by a phalanx of waiters, all working like clockwork in a dozen languages, is a sight to see.

I was well looked after by Cinzia, from Sicily, who explained the menu’s various sub-sections and separate add ons, such as the Early Bird that worked out at just €15.50.

I was particularly drawn by a big photo of truffles and the announcement that there were four separate truffle dishes on the menu.

With Maggioni’s CV I was expecting a lot and he and Stefano did not let me down.

The starter of pork belly with truffle honey and red onion jam was exceptionally good, as was the ‘squacquerone’ a type of ravioli with cream cheese and walnut pesto.

A different type of ravioli came out filled with prawns and Scamorza cheese, from Napoli, and garnished with a crab bisque, while a pumpkin risotto with scallops was stunning in its richness.

I was particularly impressed with the interesting wine list that included everything from good local Pollensa wines, to a wide range from around the island, as well as some Italian stunners such as Tignanello, from Antinori, weighing in at €125 and a Sassicaia co sting €210.

There were also quite a few chestnuts by the glass including the good value ‘Bisanzio’ Montepulciano at under €4.80.

I ended up chatting to the chefs out back, but not before trying my joint dessert of the month, which I’ll dub ‘coffee bonanza’, which comprised a plate of mixed creations, all geared around coffee and caramel.

Nearby, food lovers should make a beeline for the recentlyopened Abbaco, on the promenade. While looking deceptively like an ice cream parlour at first, once inside you will be amazed by the decor and style, incorporating a cool green wall, as well as the settings of fresh vegetables.

The food was also exceptional, thanks to Ricardo Goachet, a Peruvian, who has earned his stripes working for among others Ferran Adria, Joan Mari Arzak and Martin Berasategui.

Yup, three of Spain’s most famous chefs. Having met them all, I was excited to try his food and he did not disappoint.

I went for the daily-changing ‘menu experience’ which comprised over half a dozen dishes. These included sea bass tartare, vegetable dumplings with spinach juice and octopus ‘takoyakis’, which were fab.

I also tried a superb burrata caprese, with Mallorcan peppers, which was one of the prettiest dishes I’ve seen for a while.

Then came the ‘sticky rice’ dish, with chicken, broccoli, beetroot, artichokes and asparagus which was so darn good, not to mention healthy, I was well up for trying more. 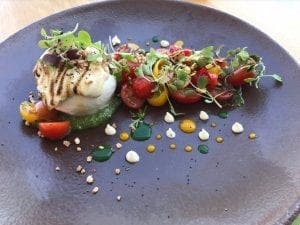 So out next came a great ceviche naturally, given Ricardo’s home country, called ‘Puerta Peruana’, as well as a decent display of California sushi rolls.

Whisky And then to top off a thoroughly enjoyable meal I had what was easily my other dessert of the month, the delicious ‘broken whisky cake’ with toffee, almonds and sponge, served out of a tipped up glass.

Original, fun and a great way to send out his punters. No trip to Pollensa would be the same without at least one meal at Cappuccino, which sits in pole position right by the water in the heart of Pollensa playa.

This is one of the near dozen restaurants from the chain on the island and while the menu is fairly short, it is always a sure fire winner, with some chestnuts, such as the roast chicken, mixed sushi and sea bass.

Best of all, you are sitting right by the shoreline and can dip in and out of the water if the mood takes you.

The views are amazing and it’s stylish insid e the restaurant too, as are all their joints. Last but not least, you should also try Al Fresco Deli, which is THE place to get great fresh takeaway fare.

It’s never less than hectic come lunch time and, if you fancy, you can sit at one of the handful of tables out front or in the back garden.

There are plenty of quiches cooked each day, plus some superb salads and one of the best tortillas I have eaten in Spain!