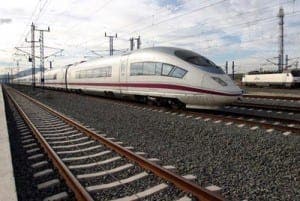 SPAIN has squandered up to €97 billion on ‘unnecessary’ infrastructure projects, a damning new study has found.

The staggering statistics have been published in a comprehensive joint report undertaken by nine leading universities.

In total, Spain spent over €81 billion alone on infrastructure that was ‘unnecessary, abandoned, underutilized or poorly planned’ between 1995 and 2016.

A further €16 billion will have been wasted once the amounts already pledged are taken into account.

Regional authority squandering amounted to €34.6 billion of the total, much of it spent on parks, hospitals, cultural centres and events.

In the comprehensive national study of wasteful spending, undertaken by universities including Malaga, Sevilla and Madrid’s Complutense, much of the problem was blamed on corruption.

From the beginning of the economic crisis until 2016, it has come down to around 3%.
Among the projects singled out for criticism was the airport in Castellon, tram lines in Velez Malaga and Jaen and the toll motorway Pedrizas, north of Malaga.

Nearly €5 billion was sunk into nearly deserted toll roads outside Madrid, which had to be bailed out by the state.

The City of the Environment in Soria, the City of Light in Alicante, the City of Justice in Madrid, the City of Arts and Sciences in Valencia, and the Alicante theme park Terra Mítica, were all labelled as ‘unnecessary projects’.

While a third of the country’s airports are unnecessary – and many were ‘built to attract votes’ – the biggest waste by far though went on AVE railway projects that did not produce the kind of social benefits expected.

There were ‘too many multi-million-euro train stations, closed lines, stretches that were dropped halfway through construction, unnecessary lines, and cost overruns’, the report stated.

“It was done without a proper cost/benefit analysis, and often on the basis of estimates of future users or earnings supported by a scenario of economic euphoria that was as evident as it was fleeting,” adds the report.

Researchers underscored the cost overruns on the AVE lines connecting Madrid, Barcelona and the French border (over €8.9 billion) and on the Pajares Tunnel (€3.5 billion).