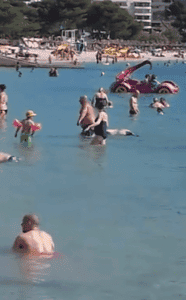 THIS is the alleged moment a man is seen ‘pulling a headless goat from the sea’ in a popular Spanish resort.

The clip shows a beach-goer emerging from the water dragging what looks like an animal carcass.

Fellow holidaymakers seem unfazed as the topless sunseeker dumps the body – which appears to have no head – on the shoreline.

He then leaves the carcass on the shore before heading back into the water.

The footage was reportedly taken in Santa Ponsa, Mallorca.

It was uploaded by Brit Alan Colley.

“Thought I’d seen it all on Santa Ponsa beach,” he wrote on Facebook. 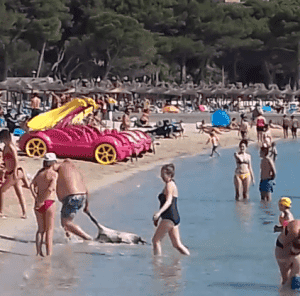 “But yesterday this guy went out to drag this to the shore after it had been bobbing up and down for a while.

“It was a headless goat.”