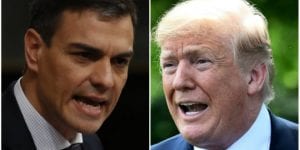 During a meeting with NATO general secretary Jens Stoltenberg on Tuesday, Pedro Sanchez said he will not increase spending, adding that his country’s contribution to global security cannot be measured by a percentage, but instead by the ‘availability of military capacity’ and ‘the willingness to use it.’

In a letter penned personally to Sanchez and other European leaders, Trump warned his NATO allies that they must increase their military spending to 2% of GDP if they want to continue to rely on US support.

Spain currently spends 0.92% of its GDP on the military.

The letter is believed to be Trump’s way of the setting the agenda for the upcoming NATO summit, due to take place in Brussels next week.