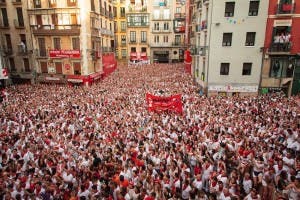 Thousands of Spaniards and tourists alike have descended on Pamplona to kick-off nine days of uninterrupted partying.

A sea of people dressed in white and red took to the city’s main square, Plaza Consistorial, to watch the launch of the Chupinazo – rocket – at 12pm, which officially marks the beginning of the festivities.

Minutes before, the mayor of Pamplona delivered a speech to the crowd from a town hall balcony, during which festival goers drink and drench each other in wine.

The dramatic and dangerous act of racing with bulls – guiding them to their pens or bullring – will begin tomorrow.

However, a dark cloud has been cast over this year’s festival with many calling for a total boycott, following the infamous gang rape La Manada – Wolf Pack – attack in 2016.

Meanwhile, the Pamplona town hall has been fighting to reassure women that the festival is safe to attend, launching a campaign named ‘Pamplona – free from sexual harassment’.

Posters have been plastered across the city, while officials have been coordinating with police, specialised staff and helplines in numerous different languages.

The police have also launched an app, ‘AgreStop’, for women to report sexual assault cases, which notifies officers with the location of where the cry for help was made.

Some feminist groups called on women this week to wear black clothes and a purple scarf, instead of the traditional white and red colours, in a bid to protest the lenient sentence the five men received for the crime.

But local feminists groups in Pamplona pushed back asking for the tradition, which has been celebrated since the 12th century, to be respected.

They added that it undermines the work they have been doing and told El Pais, that the protests were planned ‘without consensus, without any confirmation and without a clear goal’.

The festival is set to continue until July 14.