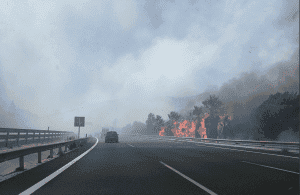 AIRCRAFT have been called to a forest fire on the Costa del Sol.

Some 18 firefighters and a helicopter have been sent to Torremolinos as flames have engulfed land next to the A-7 motorway.

The dense cloud of smoke can be seen in Malaga while traffic has been cut off at the 227 km mark, near the Palacio de Congresos in Torremolinos.

Traffic detours are beginning some five kilometers earlier on both the MA-20 and the AP-7.

The fire is believed to be on both sides of the road.

Diario Sur reports that many have left their cars to walk to the closest exit.