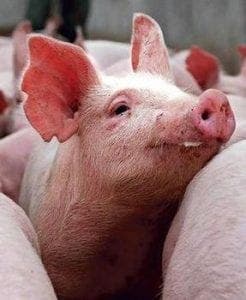 THERE are now more pigs in Spain than people.

According to the environment ministry, there are 50 million swines roaming the country, some 3.5 million more than humans.

The pig population has soared by nine million over the past five years, causing concern over the environmental impact of one of the country’s most profitable industries.

The sale of pork products brought €6 billion to Spain’s coffers last year, but the ever-growing livestock has become the fourth-largest generator of greenhouse gas emissions after transport, electricity generation and industry.

Meanwhile, every pig consumes 15 litres of water a day, totalling 750,000,000 litres – a worrying trend in a country plagued by drought.

Their waste, which containes high levels of nitrates, is also beginning to contaminate ground water, according to green groups.

It comes after a litany of food safety scandals which has damaged the industry’s image.

A police probe was launched this year after a customer returned a worm-riddled ham to a Carrefour.

Investigators revealed a network of unscrupulous suppliers and more than 50 tonnes of ham that was destined for the incinerator but instead had been relabelled with new sell-by dates.

Francisco Espárrago, who produces jamón ibérico de bellota in Extremadura in western Spain, said there were not enough resources to enforce regulations.

“For example, some animals graze in the dehesa but instead of living on acorns for the last three months of their lives they’re given animal feed, but the inspector sees the pigs in the woods and so they receive the denomination.”