THE world’s best culinary experience has officially been awarded to an old Spanish tradition. Well, Basque that is.

Choosing from 500 different food experiences from all over the globe, Lonely Planet’s panel awarded the coveted top spot of the ‘Ultimate Eatlist’ to pintxo hopping in San Sebastian’s old town. And it’s not difficult to see why.

San Sebastian is truly unforgettable when it comes to eating out, but I’m Team Bilbao after moving to the rival Basque city at the tender age of 21, where pintxo-hopping quickly became an obsession.

It’s not only food, it’s a way of life packed with tradition, culture, history and the best way to socialise setting you back just €3 for a bite and a glass of vino alongside.

I’ll never forget being in awe of the futuristic Guggenheim museum’s reflection in the river contrasted with the charm of the old architecture as we drove over the mountains into the city centre.

And most importantly, trying my first pintxo – the classic ‘taco de bonito’ – a wedge of cooked tuna with diced onion and pepper, drizzled with balsamic vinegar and olive oil. I was hooked.

For those who don’t know the wonders of these mini taste explosions, traditionally they consist of a slice of bread with ingredients piled sky-high on top, secured with a toothpick.

As culinary trends changed, the pintxo evolved and now hungry diners can find everything from traditional dishes to molecular gastronomy renditions and everything in between.

It’s thought the origin of the pintxo started in the 1930s, when the Andalucian tapas trend made its way up to San Sebastian and locals began to create miniature versions.

Between the 1940s and1960s, the trend spread to Bilbao, Vitoria-Gasteiz and Pamplona and txikiteo was born – the practice of hopping (tipsy) from bar to bar with a kuadrilla, a close group of friends.

To the pintxo virgin, the first time you spot a sea of colourful and mouthwatering bites laid out in neat rows on the bar waiting for you to swipe, is a complete sensory overload.

You’ll also learn to swap Sangria for the grittier Kalimotxo – red wine and coke – which sounds vile but is a great pintxo partner on a Saturday night on Calle Somera, in Bilbao old town’s boho gothic street.

Anyone visiting Bilbao can’t leave without a trip to the iconic Victor Montes in the old town. Recognised as a pioneer of the region’s cuisine, this old-style black and white themed bar specialises in classic Basque seafood pintxos piled with angulas (eels) or raw salt cod (bacalao), a proud regional product.

The proof is in the pudding as famous guests include Bono, Prince Albert of Monaco and Jeremy Irons.

Cafe Iruña, arguably Bilbao’s oldest eatery set up in 1903, is worth a visit for the decor as much as the food. 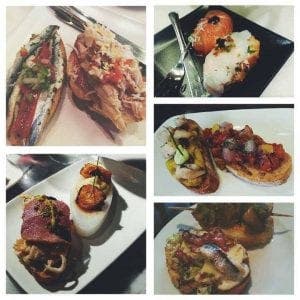 Don’t miss the mini lamb skewers, which attracts daily queues round the corner.

For the cheese lovers out there, you’ll be in dairy heaven at Bar Gaztandegi – Bilbao’s only pintxo bar dedicated solely to the yellow gooey stuff.

El Globo, tucked behind Gran Via, is a sure-fire winner serving classics such as Txangurro gratinado – crab in a breaded butter and garlic sauce served in a crab shell.

So yes, credit where it’s due, San Sebastian is fabulous, but don’t bail on Bilbao’s pintxos.

In a two part Bilbao series, I’ll reveal the ten best pintxo hotspots and why Bilbao is a must-visit for foodies and tourists alike.