SEVERAL police cars have rushed to the scene of a shooting on Estepona’s promenade.

At least six Policia Nacional vehicles are on the scene on Avenida de Espana after reports of several gunshots.

Police have placed around 13 orange cones on the ground, believed to highlight shell casings. 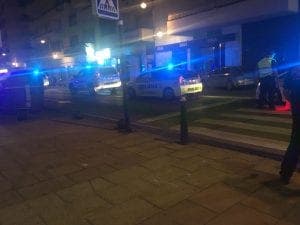 It comes after at least nine gunshots were heard around an hour ago, causing mass panic in the seaside town.

Dozens of locals and expats were seen running and locking themselves into restaurants.

While there were reports of two suspects being chased, one witness told the Olive Press: “We were driving away from Estepona towards Cancelada.

“As we passed the beach we heard shooting.

“We were then overtaken by a grey BMW X5 at speed heading in the same direction as us!”

“It was crazy,” another British expat said, “People were in a panic and started running into restaurants.” 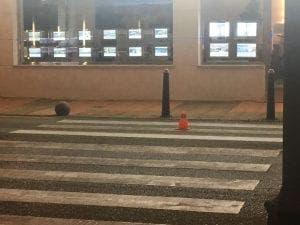 The Brit said she was locked inside popular haunt Rincon Toscano for around 15 minutes.

“It was terrifying,” she said, “we had no idea what was happening, we’ve all got memories of what happened in Paris and Barcelona, we thought it might have been a terrorist attack.” 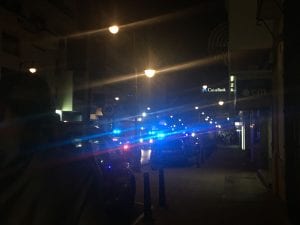 A waiter told the Olive Press: “I was outside serving and I heard boom, boom, boom!

“I thought it was fake then I saw everyone running, it was insane.”