THE urban bible Time Out may have felt they were doing the Madrid barrio of Lavapiés a favour last month when naming it the coolest hood in the world, but for the majority of its long-term residents, it was anything but.

“What’s happening is not at all cool,” says a member of Tabacalera’s Promoción del Arte team who prefers to remain anonymous.

“These kinds of labels do a lot of harm. Flagging it up as trendy means that rents go up and there’s an increased police presence as well as an increase in racism because social classes become polarised. It has pretty negative repercussions.”

Another from a recycling art collective at Tabacalera’s social space next door went further.

“This is exactly the kind of thing that is ruining the barrio. I don’t even know who voted. I mean, who said that? It just depersonalises the barrio. It’s capitalism run riot.”

Since it first came into being in the 15th century, Lavapiés has been considered by those on the ‘right’ side of the city as a seedy, no-go area, with its steeply inclined streets, poverty and distinction as home to the city’s densest immigrant population – once from elsewhere in Spain and more recently from Senegal to Shanghai and everywhere in between.


In 2004, it made headlines as the centre of operations for the 11/M bombers who met in La Alhambra restaurant and used phones to trigger the multiple explosions from Jamal Zougam’s locutorio on Calle Tribulete.

It was, then, touted as a hotbed of Islamic terrorism, an image that has been conveniently relegated to history.


Curiously, there was a Muslim community here in medieval times.

Situated just outside the city walls, it was a refuge for Jewish and Muslim converts and it is thought the area was called Lavapiés – wash feet – on account of the cleansing rituals in the local fountain of people coming in and out of the neighbourhood.


By the 18th century, Lavapiés had become strongly working class with the Tabacalera cigarette factory providing around 6,000 women and 300 men with jobs while the corralas peculiar to the area provided much of the accommodation.

Gradually, families migrating to the city from other parts of Spain laid the foundations for the multi-cultural buzz associated with the area.

At the same time Lavapiés became synonymous with the term castizo, used to describe the essence of hailing from Madrid.

But neither of these attributes were considered at the time to be particularly desirable.

According to Arturo Barea,the author of The Forging of A Rebel trilogy, who lived with his mother, a laundress, in the hood between 1905 and 1914, “At that time, Lavapiés was the frontier of Madrid. It was where the city and the world ended (…). People had christened the limits of the barrio, The Americas and The New World. It was, without doubt, another world. Civilization and the city reached as far as that. And that was where they both ended.”

Barea talks of open sewers, smoke belching from factories and blackened putrid streets and the smell of mule dung rising from the central patios of the corralas, all of which earned it the moniker, Barrio de los Injurias, meaning the Neighborhood of Insult.

Recently, however, its castizo and ethnic credentials have elevated it to an altogether different realm.

When Time Out not only confirmed that it was shedding it down-at-heel image but declared it the champion of cool, its residents, 56% of whom voted for Podemos-citizen platform Ahora Madrid, were incensed afresh.

So much so, that staff at the Teatro del Barrio, which puts on productions such as Women Who Dare, consisting of monologues by historical local female figures and La Sección that explores women’s lives under the dictatorship, refused to comment on the unwelcome recognition.

It’s not hard to understand their stance.

Being elevated to the world’s coolest area according to Time Out’s criteria of“affordability”, “cool new venues opening” and a multi-cultural buzz – “This is where people from near and far live side by side, cooking up a bustling cultural life” – inevitably kills the goose that lays the golden egg.

Tourists flood in along with the well-heeled and the immigrant, artistic and activist communities responsible for the label finds themselves squeezed out.

Those who originally lent it an air of street credibility and authenticity are forced south to barrios such as Carabanchel and Puente de Vallecas.

According to Manolo Osuna from the Neighbours’ Association La Corrala Latina-Rastro-Lavapiés who has lived in the barrio for 50 years, “I like the label and I don’t like it. On the one hand, it makes me proud because for so long nobody wanted to come here. It was considered dangerous and there were no young people. It was thanks to the immigrant population that there was any life at all. On the other hand, I don’t like it, because it brings more tourists and turns it into a theme park. I once knew 90% of my neighbours, now I barely know 10%. If this goes on we will be the victim of our own success.”

Echoing Manolo’s words is HAPS, a member of Fisidici cooperative, which has a sign outside its bicycle repair shop that says ‘Lavapiés no se vende’.

Commenting on the groups of perplexed tourists on guided walkabouts through the area, HAPS says, “We’re turning into a zoo! A recreational barrio, not somewhere that people work and live. The solution has to be both political and local. Those of us who live here have to put up a fight.”

The exodus was kicked started by the urban plan of 1997 that subsidised an enforced refurbishment of old residential buildings – subsidies that according to Manolo were exploited by investors.

Prices doubled and doubled again, and having recovered from the downturn during the economic crisis, they have now caught up with the Palacio area and Malasaña.

According to idealista, Lavapiés now has the fifth most expensive rents in the centre, trumping areas such as Arapiles in Chamberi and Arguelles in Moncloa.

So will its new status as the very essence of urban cool accelerate its rise?


According to Manolo, one way this could be averted is reintroducing five-year term rent contracts – one of the proposals in the 2019 budget signed this month by Pablo Iglesias and incumbent Prime Minister Pedro Sánchez.


What comes to mind as I stroll up and down streets where the mother of Barea, once carried laundry from the other side of the divide to the River Manzanares, is the old adage about the sow’s ear and the silk purse.

However much real estate investment companies such as EnfoKamight want to turn Lavapiés into the next Notting Hill, there is some way to go before they meet their goal.

Despite the presence of the Centro DramáticoNacional in the Plaza de Lavapiés, the University Library in the ruins of the Iglesia de las Escuelas Pías de San Fernando and hip watering holes such as SalaEquis mentioned in the Time Out report or La Playa de Lavapiés and La Libre on Calle Argumosa,this is still a corner of Madrid where drunks feel at home and dog owners turn a blind eye when their pets do their business on the pavement.

It is also an area where migrants sleep ten to a room in shifts and activism and Podemos thrive.

And while tourists might gravitate to Airbnbs here, the city’s mayor Manuela Carmenahopes to curb this particular trend with El Plan Especial de Usos del Hospedaje that is set to wipe out around 95% of this kind of tourist accommodation in the city centre, pending approval by the City Council.


She does, however, have something of a battle on her hands.

According to Housy, an agency which manages Airbnbs, more flats than ever are being refurbished in the area for tourist lets with little sign of a slowdown in response to the measure.


It seems sad but almost inevitable that neighbourhoods like Lavapiés, so long considered beyond the pale, are now subjected to a different kind of ‘Injuria’ – or insult.

Raw and colourful, the barrio is cool precisely because the communities here don’t care about being ‘cool’ in the Time Out sense of the word.

Ironically, as prices go up, these communities will leave and take their ‘coolness’ with them.

Consequently, Lavapiés will be reduced to just another overpriced shell and those seeking to capitalise on the elusive cool factor will be chasing the very people they priced out of their homes south of the river. 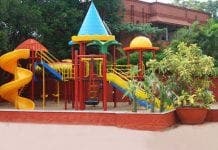