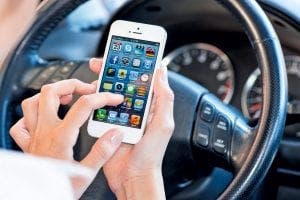 DRIVING while using a mobile phone has overtaken intoxication as the second most common reason drivers are fined in Malaga.

Some 3,344 offenders were fined between January and August this year for driving while on the phone without a hands-free device, while 72 were repeat offenders.

It comes after new figures, by the Provincial Traffic Headquarters, also reveal that some 29% of fatal road accidents are caused by loss of attention.

Mobile phone use is classed as one of the most dangerous causes as it requires more attention than other actions such as smoking or changing the radio.

Officials said the increased risk of road accidents is also due to the growing popularity of apps such as WhatsApp, for which drivers can see between three to six points deducted from their licence.

Although many throw their mobiles on the floor in an attempt to hide the evidence from officers, it does not stop them from being slapped with a €200 fine.

Speeding still remains the number one offence, with 10,268 fines handed out, while drink driving is in third place which saw some 2,094 fines.