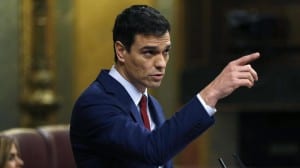 SPAIN has doubled down on its threat to vote down the Brexit withdrawal agreement if there are no further assurances on Gibraltar.

Spain’s prime minister Pedro Sanchez said this morning that he will vote against the UK’s exit deal if the text on Gibraltar is not changed.

The PSOE leader said: “As of today, if there are no changes with respect to Gibraltar, Spain will vote no to the agreement on Brexit.”

Foreign Minister Josep Borrell said yesterday that Madrid needs more clarity on the future status of the Rock before it can offer its full support for the UK’s deal.

“There is an article that we only found out about on Wednesday,” Borrell said, following a meeting of EU’s European affairs ministers.

“We want to make sure the interpretation of this text is clear and shows that what’s being negotiated between the EU and the UK does not apply to Gibraltar.”

It comes just days before Theresa May is hoping to seal the deal in a key meeting with EU leaders on Sunday.

May is already struggling with euroskeptics within her own party, who see the deal as a non-starter for giving too much power to the EU.

Meanwhile Labour under Jeremy Corbyn has already vowed to vote down the agreement in parliament.

Borrell warned that his country’s support for the deal is now contingent on the content of the political declaration on the future ties between the two sides.

Sources from the meeting claim Spain argued Gibraltar is not a part of the UK, meaning any future agreement can’t apply to its territory.

It also said that if the Rock wanted an extended transition period along with the UK, it would have to negotiate its own.

“The future negotiations over Gibraltar are separate,” Borrell told reporters in Brussels.
“Until that’s clear in the exit text and the political declaration over the future relationship, we won’t be able to agree to it.”

Anthony Piovesan - 31 Jan, 2023 @ 11:00
The Costa del Sol is notorious for its drug activity, but perhaps no other photo sums it up better than this one.  Dozens of petrol...