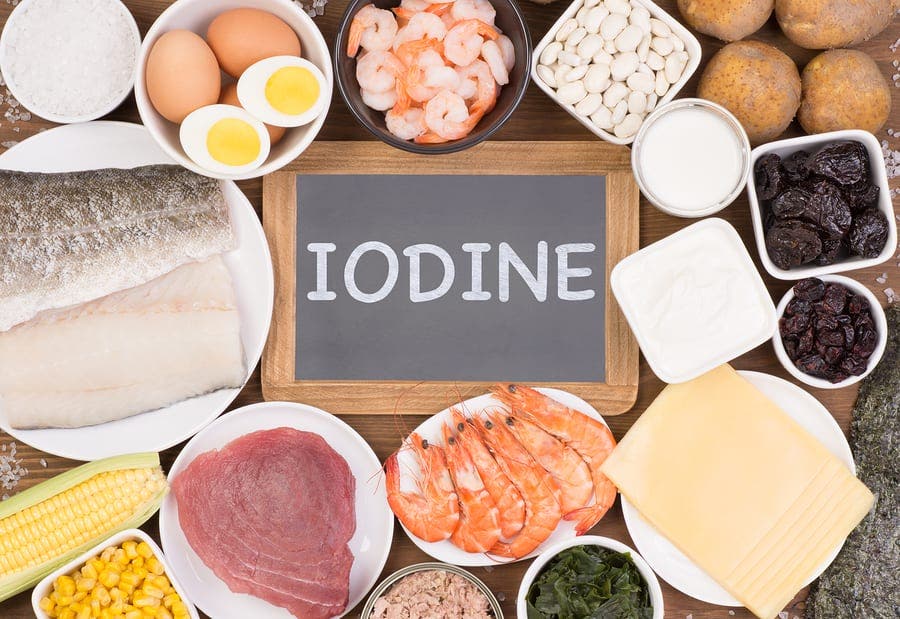 Health experts always recommend that we include foods that contain iodine in our daily diet.

Pregnant mothers are often given supplements that contain the mineral. In some countries, it’s even a legislative requirement to iodized table salt. But how essential is iodine as a nutrient? Ever since it was found to be present the human body, a lot has been discovered concerning the health advantages it offers. Scientists now understand how the mineral is utilized in the body, its benefits, risks, and the effects of having it in low levels.

Iodine is Necessary for Physical Growth and Intellectual Development

The benefits of iodine are many and varied. It’s connected to numerous processes in the body that control physical as well as neurological development. Low levels of the nutrient can mean reduced rates at which these processes occur, usually with serious effects. It all starts in the thyroid gland where the thyroid hormones are produced. Iodine forms a part of these hormones and adequate amounts of the mineral enough quantities of the hormones circulation your body.

In addition to regulating metabolism and the basal temperature of your body, thyroid hormones are needed for the synthesis of proteins and long bones. Lack of iodine can, therefore, cause impaired physical growth. The hormones also help the central nervous system to develop by controlling the maturation of neural cells, and low levels can result in mental retardation or brain damage. Apart from aiding physical and neurological processes, there are other ways through which iodine improves your health. They include boosting the immune system, enhancing reproductive health, fighting free radicals in the body, and more. This article, 5 Bonus Benefits of Iodine, explains these health advantages in detail.

Iodine is Required Early in Life and Throughout

Iodine is a vital mineral right from when a baby yet to be born, immediately after birth, in the early years of life, and well into adulthood. Pregnant mothers are required to take enough of the mineral for the brain of the fetus to develop properly. Also, when breastfeeding since the baby gets its nutrients from breast milk. Deficiency can cause brain damage in an unborn child and an infant who has an irreversible condition of mental retardation. Studies have shown iodine deficiency to be a leading cause of low IQs in children and various intellectual disabilities.

The Effects of Iodine Deficiency in Adults

Lack of iodine causes various symptoms to appear. Some of them are noticeable such as goiter, which manifests itself as a swelling in the neck. Others are not so obvious, and may not be taken to be a sign of iodine deficiency unless properly diagnosed by a health practitioner. The symptoms that you have low iodine levels include:

In some countries around the world, table salt is fortified with iodine as a legislative requirement. A tablespoon of such salt contains about 400 mcg of iodine. If you live in one of those countries, your daily dietary salt should give you enough iodine to keep you protected from the risks caused by its deficiency. If you’re not as lucky, there are foods that contain high amounts of the mineral and which, when eaten in the right quantities, will supply you with enough iodine. It’s good to note that the salt present in processed foods does not contain any amount of iodine and eating those foods doesn’t contribute to your dietary intake of the mineral. Foods that are rich in iodine include:

Daily requirements vary by age, with infants and children up to 8 years needing 90 mcg of the mineral. Those aged between 9 and 13 years require 120 mcg each day while 14 year-olds and above require 150 mcg. Pregnant and nursing mothers need the highest amounts; 220 and 290 mcg respectively. In cases where dietary intake of iodine is insufficient and the health of the fetus at risk, pregnant mothers should take it in the form of supplements.

In spite of iodine being such an important nutrient, cases of deficiency run into millions. It’s a worldwide concern that has plagued even the developed countries. Many people tend to ignore the daily requirement in the food they take, while governments still show reluctance to implement the idea of universal iodized salt. To protect yourself from the crippling effects of iodine deficiency, always take the right foods. Most of the foods that contain the mineral are not hard to find. And if your country has iodine fortification measures in place, ensure you only buy table salt that’s iodized. In severe cases, supplements can help.