AROUND 300 Madrid airport workers have gone on strike because it is too cold, placing thousands of British holidaymakers in jeopardy.

As New Year arrives, staff from the company Eulen have said they will strike at the Adolfo Suarez Madrid Barajas airport until January 21.

Their refusal to work began on December 21 and was organised by the union, Alternativa Sindical.

Union representatives alleged that security officers who patrol inside and outside the airport have not been paid their promised bonus, according to The Sun.

The workers group also claimed the ‘law of prevention of occupational hazards’ is being breached as the staff are not being provided with warm clothes for the cold weather ahead.

An agreement has still not been reached between the workers and Eulen, as it is claimed that the company ‘persists in breaches’ over labour and wages.

The company said that the strike was ‘almost imperceptible’, as it had brought in extra staff to cover the shortfall.

Eulen did however criticise Prime Minister Pedro Sanchez’ government for ruling that even during a strike, 95% of services must be covered.

It comes as Spain saw its overseas visitor numbers drop by 4.9% in July of this year, compared to the same period in 2017.

This decrease was the biggest in Spain for eight years, but 1000s of Brits are expected to flock to the southern European country over the festive period. 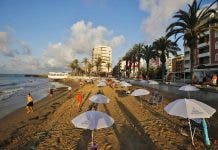