THIS is the moment a British Airways plane came into some serious turbulence while trying to land in Gibraltar.

The clip, which has gone viral on social media, was recorded today and shows the plane tilting from side to side.

At one point the plane almost rotates a full 90 degrees while descending into the Rock.

One Gibraltar resident claimed she was on the flight, which had to be diverted to Malaga this morning.

“I was in that plane, very scary indeed,” she wrote online.

Another claimed she saw the flight as it tried to descend on the British Overseas Territory.

“It was awful!” she wrote on Facebook, “Never seen a plane rock from side to side as much ! Scary.

British Airways confirmed the flight had to be diverted this morning due to very strong winds.

British Airways told the Olive Press: “The flight has landed safely and passengers have left the aircraft normally.

“Due to strong winds in the Gibraltar area, our pilots decided to land in Malaga as a precaution.

“The safety of our customers and crew is always our number one priority.”

A spokesperson added: “We’re arranging ground transport for affected customers to allow them to continue their journey to Gibraltar and apologise for the disruption to their journey.

“There was nothing wrong with the aircraft and at no point was there a risk to safety.” 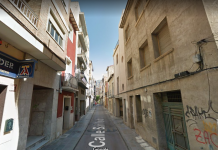