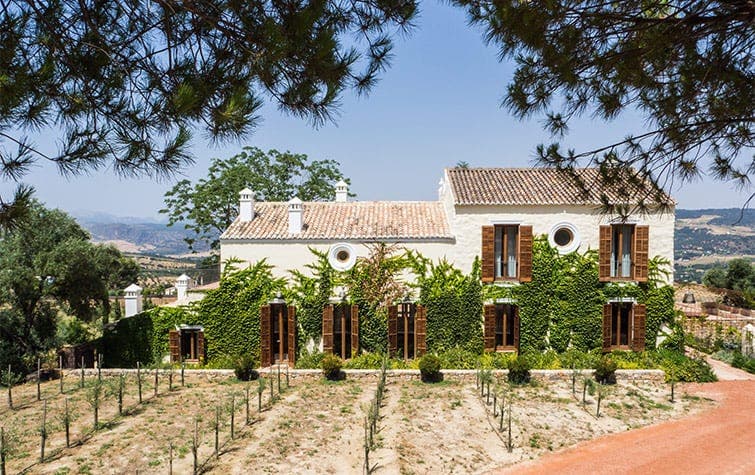 THE small picture window perfectly frames the mountain range, and reason, why this corner of Spain is almost as green as England.

In the shimmering distance you admire the fabled peaks of the stunning Grazalema mountains – Spain’s wettest place – just over 10 miles away.

Perched on a stool to enjoy it, the solid copper structure/frame is just one of a dozen or so interesting exhibits that make French designer Philippe Starck’s exciting new LA Organic Experience well worth a visit this year.

The ‘immersive’ cultural centre on the outskirts of Ronda has taken ten years and a reported €20 million to come to fruition.

Designed by the global design guru Starck – alongside six other investors, including French wine maker Michel Rolland – it sits on 25 hectares and has seen the planting of over 9,000 trees as well as 1,000 vines.

Entirely organic, it includes a superb ecological vegetable garden, as well as dozens of different types of trees, mostly fruit and the majority olives.

This is the second part of the exciting project, that began over a decade ago with the launch of LA Organic olive oil, its stylish cans also designed by Starck, and for sale around the world in shops including Planet Organic, Harvey Nichols and Waitrose.

The multi-millionaire designer, who worked for the likes of fashion guru Pierre Cardin and former French president Francois Mitterrand, will introduce a third stage, including a giant olive mill and restaurant over the next year.

Starck also sculpted the rooms of a mini-hotel in the grounds and has made the unusual visitor centre, basically a converted warehouse, into a space that cleverly blends into the landscape.

There are various exhibits scattered around, such as a mirror placed for the visitor to become ‘the star’ of the landscape, as well as a slightly bizarre cracked mirror under some eucalyptus trees.

You are primarily here to learn about the region’s olive oil though, which its owners believe has far too long been globally put in the shade by oil from nearby Italy.

“The oil from Andalucia is as good as anything in Italy and we want to promote it at its very best,” explains director Santiago Muguiro.

“We hope to educate the public in the different methods and ways of creating it and the idea is to become pioneers of olive oil tourism in Spain, as some of the big vineyards have become in Rioja,” he adds.

The tour costs €20 for adults and includes various olive oil tastings, the tour and a film. Visit www.laexperience.es for more info