Some 870,000 people in northern Spain return to Phase 2 after nearly 200 new COVID-19 cases in region since Friday 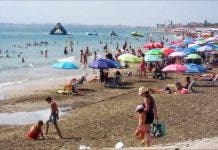 A PRISON officer has been arrested alongside 43 members of the Italian mafia and Cadiz’s notorious Castañas Clan.

The prison guard is accused of plotting to help free the Castañas leader Francisco Tejon from the Penitentiary Center of Alhaurín de la Torre.

He was reportedly bribed by the group, but was rumbled before the escape could be attempted this month.

The discovery of the plot was made under Operation Alliance, an international investigation involving Spain’s Policia Nacional and Guardia Civil and Italy’s Carabinieri.

The task force began digging into links between the Ndrangheta mafia and the Castañas clan in March 2016.

Investigators soon identified the head of the Costa del Sol branch of the Italian mafia and tracked him to a home in Sotogrande.

It was from there that he acted as intermediary between the drug suppliers – mostly hashish – in southern Spain and members of his organisation in Italy.

The hashish was transferred from Spain to different countries in Europe, mainly Italy, and was hidden on trucks of transport companies, often among food and furniture.

In June 2018, after the escape of a member of the Castañas clan from a hospital in Algeciras, agents carried out their first set of arrests in a rural hotel in Jimena de la Frontera (Cádiz), where the alleged gang members paid more than €8,000 per month to stay.

It was then that investigators discovered the plot to free Tejon and that a prison officer had been bribed to offer logistical support.

In the second phase of the operation in April this year, officers arrested nine people in Los Barrios, Algeciras, Guadiaro, Marbella, Torremolinos and Malaga, and four others in Italy.

In total 44 have been arrested, accused of belonging to a criminal organization, bribery, money laundering, crimes against public health, illegal possession of arms and falsification of a public document.