THE sun-baked coastlines along the Marina Alta are extremely lucrative for developers.

Unbeaten views of the Med offer a paradise, with buyers from all over Europe clamoring for a slice of the property market.

But developers appear to be flaunting environmental impact studies for fast cash.

The ‘save 100 lives’ petition launched in Balcon al Mar, in Javea, concerns 100 residents whose homes are literally on a cliff-edge.

A luxury home, reportedly on the market for €2.4 million, has had eight-metre foundations to make way for an ‘underground swimming pool’, according to resident Ana Fernandez.

Her home, one of 27 bungalows, is on the other side of a dangerous precipice that already saw a seven-foot boulder crash down after the floods on Easter Sunday – narrowly missing a bungalow inhabited by an Austrian pensioner.

Fernandez’ petition urges the town hall to halt development until the site is secured.

Authorities must take the necessary precautions to avert this disaster, which would not only be a national tragedy, but severely damage Alicante’s prospering housing market. 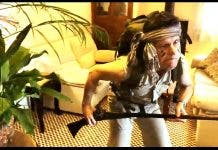 Laurence Dollimore (Digital Editor) - 5 Apr, 2020 @ 11:58
THE number of people killed by COVID-19 in Spain has dropped for the third consecutive day in a sign that the country is beating...