HAVE you any idea how much summer adds to your carbon footprint? That question crossed my mind as I whacked up the AC and prepared to sweat out another August in Spain.

Aircon – as essential as breathing on the Costa del Sol during the hottest month of the year – accounts for almost 10% of the planet’s energy use. But Mother Nature has a greener alternative.

Animals don’t sweat so they have some pretty wild ways of staying chilled without contributing to global warming. Wouldn’t it be cool if we humans could adopt some of nature’s grand designs? Well, maybe …

Be more koala – hug a tree. That’s how these cute marsupials compensate for being stuck in a thick fur coat during the Oz summer. Trees can be several degrees cooler than the air temperature and when the koala clings to the trunk, its heat transfers into it, also reducing its need for water.

Wallow in mud like a pig. It’s cool, moisturising and an anti-parasitic. Humans can get the same effect at the Roman Baths of Hedionda in Manilva (just up the road from the Olive Press offices) with its refreshing sulphur spring and mineral-rich mud.

Sleep through it. It’s not just the Spanish who take a siesta during the heat of the day. Some animals ‘estivate’ in hot weather, switching their metabolism to go-slow, avoiding the need to look for food and water. The African bullfrog finesses the technique underground, making its own moisture-trapping cocoon where it can survive without sustenance for up to seven years. When the rains arrive, the cocoon softens and the frog springs back to life.

Spit on your arms like the ‘Big Red’ kangaroo. Gross as it sounds, roos have a network of blood vessels in their forearms capable of cooling down their whole body when there’s no handy billabong nearby.

Soak your breasts in water like the desert sandgrouse. The bird’s moisture-trapping chest feathers act like a portable drinks pack, allowing it to transport water back to the nest for its thirsty chicks.

Stand on your head like the Namibian fog beetle. When the desert mist rolls in, it climbs to the peak of the dunes to collect condensation in grooves on its back, performing a ‘handstand’ so the water drains into its mouth. The mist forest of Los Alcornocales Natural Park in Cadiz province is a good place to try this for yourself.

Make your own waterproof sunscreen like a hippo. Hippos factor out sunburn by secreting a mucus-like substance that blocks UV rays and repels water, allowing them to stay submerged for longer. In sunlight it turns red, convincing early European explorers that hippos sweated blood.

Wet yourself like a bird. Luckily we humans can cool off at the turn of a shower tap but storks and vultures have a yuckier way to stave off the August heat. They pee on their legs! 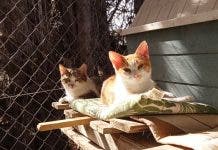