A SPANISH comedian has gone viral for his song detailing why ‘Spain hates the Brits’.

In the two-and-a-half minute clip, UK-based Ignacio Lopez performs his own hilarious lyrics to the tune of Umbrella by Rihanna.

The tongue-in-cheek medley sees Lopez blast British tourists for mispronouncing paella and drinking too much Stella.

“They come every year, in Union Jack gear,” he sings, “And rubbish football shirts.

“Fake tan for all the girls.

He then breaks into the iconic chorus of the Barbados superstar’s hit song, singing: “Because…when they all come, they come together…

“They think football songs are clever…

“Some of them calling me Manuel… that’s not my name, you can just go to hell…

“Now there’s more of them than ever, always complain about the weather, starting to look a bit like a heifer, maybe you should cut back on the Stella-ella-ella…”

The British audience can be heard howling at the song, which goes on to mock tourists mispronouncing paella while wearing ‘gold chains and Ben Sherman shirts’.

The clip, which has thousands of shares, was recorded at The Perch Swansea.

Readers in the UK can see Lopez next perform at the venue on November 27, tickets available here. 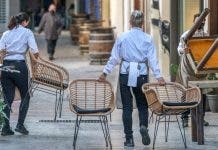